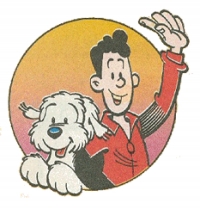 During Christmas holidays of 1989-1990, a dog called “Samson”, was introduced by the new TV announcers on “BRT” (Belgian public broadcaster).

These new TV announcers wanted to make the announcements for youth programs more attractive by using an opponent, by means of a puppet, the dog “Samson”. In this way, Samson was used on Wednesday and Sunday as regular opponent in the announcements. As of September 2000, Samson received his own program, scheduled between the various programmed youth programs. The program was recorded in the living room of the presenter “Gert Verhulst” and his dog “Samson”. Gert Verhulst announced, together with his dog, the various youth programs, in a playful manner.

From 1990 till 1997 BMC-Group acquired all commercial rights regarding “Samson & Gert” for BRTN (VRT) and launched its full commercialization.

In 1997 the cooperation expired and Studio 100 was created by the artists of “Samson & Gert”. Since then all commercial interests were transferred to Studio 100.