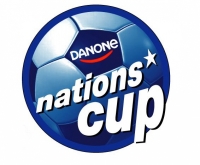 Each year, SVS organises, in cooperation with Danone, the « Danone Nations Cup ». It is a football happening designed for third grade boys and girls of primary education, and developed by BMC-Group.

The pupils learn the first skills of football through football linked drills by means of child friendly structures installed in circuit form. In this way they have the opportunity to test their technical skills.

The exercises are chosen in such way that most aspects of the football game will appear.

By determining the order of exercises, the intensity level is taken into account. Purely technical exercises are interspersed with duel forms (1-1,2-2) and scrimmages (4-4). Stands with inflatable structures are distributed throughout the trail.

Although the term ‘exercises’ is used, all stands are meant to be a game, which is more attractive for the children. Sometimes an individual score can be achieved, next time it is a two person competition, another time there is a team competition, and from time to time the aim is the best possible outcome pursued by the entire group.

This happening takes place in every province and is designed for all boys and girls of the third grade of primary education. There is only one category. Every school can participate in this football tournament.  This is a 8 versus 8 football tournament, with each one goalkeeper. The winning team from this contest will have the opportunity to participate in the national finals.

Every year in May, at a suitable location, the national finals of the Danone Nations Cup are organized at a centrally located football stadion.

Ten provincial teams try to convince the jury of their value on the field. A place in national team is at stake.

After the contests, the Belgian patron of the DNC tournament, designates two teams to represent Belgium during the international tournament in September.

The Danone Nations Cup initially started with eight participating countries in 2000, to grow to more than 40 countries in 2015. The Danone Nations Cup was recognised by the FIFA for the international final, and can rely on the patronage of the ministries of sports, youth and health in the various countries. It is supported by many football icons from around the world, like Zinedine Zidane in France.